Sorkin finished her high school tennis career with an astounding 89-1 record, featuring four state singles and doubles titles as well as one team championship. She was also a 4-time selection as RTD All-Metro Player of the Year. Aside from her superlative career as a competitor on the court, Sorkin was also active as a volunteer at local tennis events such as the MAC Wheelchair Open at Midlothian Athletic Club and wheelchair tennis clinics organized by Sportable. Nina will be playing varsity tennis this fall at Virginia Tech.

Bernstine, who played No.1 for Goochland, won three 2A state titles and was recently named All-Metro player of the year for the third consecutive year. Chase wrapped up his senior year with 20-0 in singles and 18-1 in doubles, with state titles in both singles and doubles (playing with his brother Ryan). Also an active volunteer in the RVA tennis community, Bernstine has served as a court monitor for the 10-and-under city junior tournament at Byrd Park and has helped his father, Mark Bernstine, run junior tournaments for beginners at Hermitage Country Club. Like Nina, Chase will also be playing varsity tennis at Virginia Tech this fall.

“These two outstanding individuals are great ambassadors for tennis,” noted Eric Perkins, local small business and nonprofit attorney who was a sponsor of this year’s scholarship, “their talent and accomplishments on and off the tennis court are inspiring to see. Both have bright futures ahead of them, and I hope that tennis will continue to play a meaningful part in their lives for years to come.”

“Tennis is a uniquely valuable sport in our society because it is an activity you can enjoy your entire life. Tennis offers a complete package of benefits that no other sport or recreational activity can match–physical fitness, sportsmanship, integrity, perseverance, social networking…the list goes on and on. Let’s also remember that RVA has been recognized as one of the best tennis towns in America,” noted Perkins.

Both Sorkin and Bernstine will receive a one-time $1,000 scholarship toward tuition, fees, and expenses. All scholarship applicants were required to submit not only a written application describing their activities and accomplishments in tennis, academics, and community service, but also submit a short video expressing what tennis has meant to them. Those video clips can be viewed on YouTube. 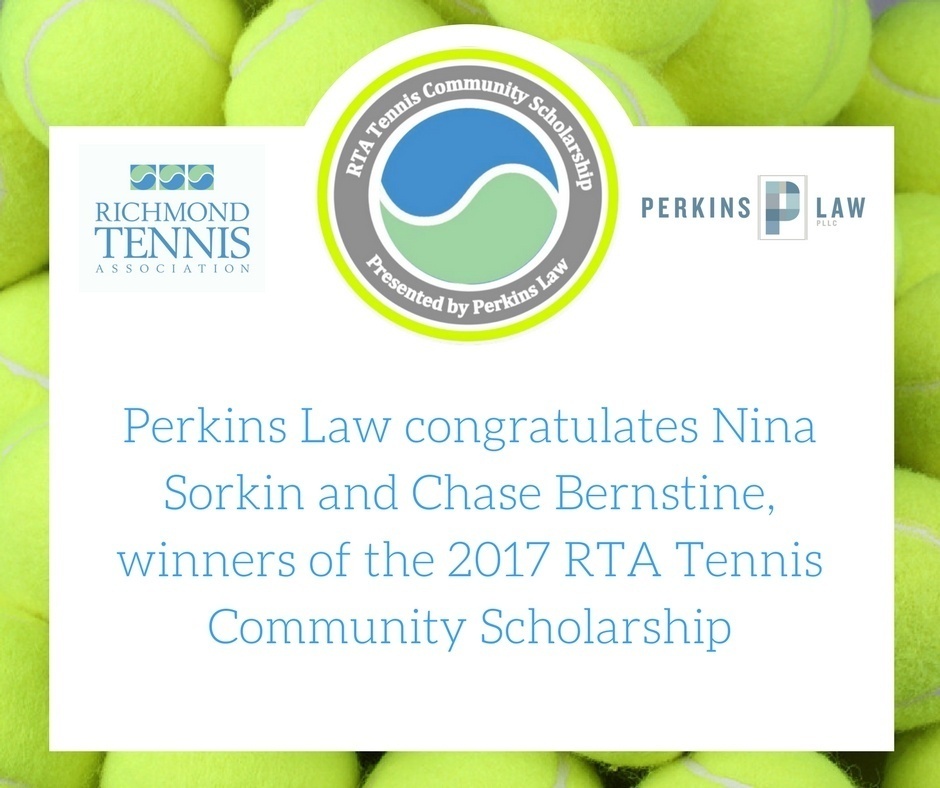 Perkins to Discuss the “Five-Finger Philosophy of Nonprofit Board Composition”

Nonprofit converts to “B” corporation for access to capital

Where Are They Now? Featuring Nina Sorkin