Successful business ideas can come from anywhere.  Many popular, widely-used products have very unusual origins.  Take the treadmill for example.  This standard feature of any modern fitness center is actually based on a torture device used in prisons in the 19th century and affectionately referred to as the “everlasting staircase”.   According to an article by Corey Protin and Matthew Stuart published in Business Insider in April 2017, the device consisted of a paddle wheel large enough to accommodate over three dozen prisoners all climbing in a monotonous task designed to crush their spirits. 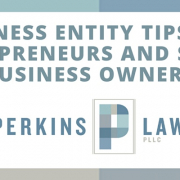 Social Entrepreneur Networking Event Coming Up on Tuesday, May 14 at 5:30 pm

#RVABizLaw Tip of the Day: Be Careful About Signing Personal Guarantees

RVABizLaw Tip of the Day: A Few Good Things to Know About the Virginia Benefit Corporation

A Social Media Self-Assessment for Professionals